Your health in your hands: Announcing our pilot study results 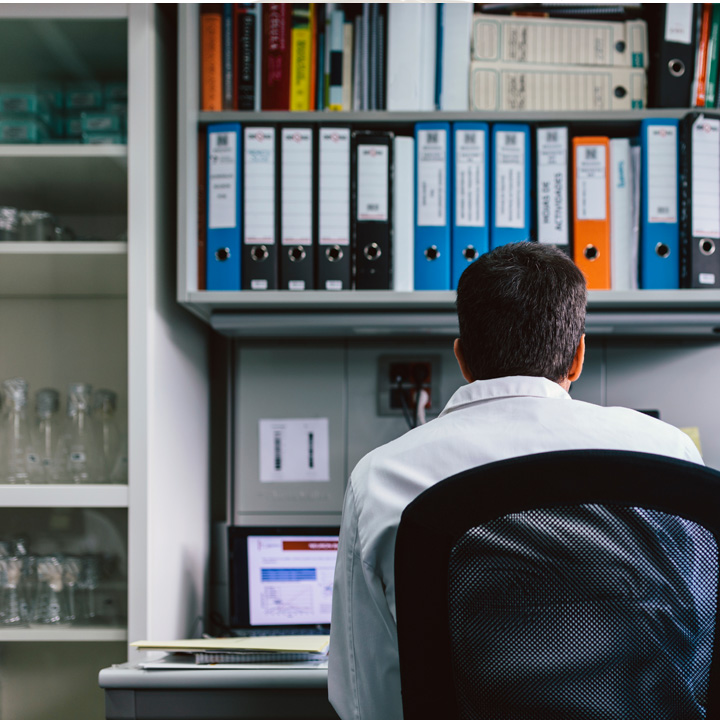 For decades we have known that a small number of lifestyle changes can have a big impact in preventing, treating and in some cases even reversing common chronic diseases. The what - like a dietary pattern featuring an abundance of fruits, vegetables, whole grains, legumes, nut and seeds, regular exercise and not smoking - has been established, but the how has remained elusive. How do we apply what we know in a cost-effective, scalable and widely accessible manner to fight disease and enable healthier, more vibrant living?

At Better Therapeutics (f/k/a FareWell), our answer to the how is to pioneer novel digital therapeutics targeting lifestyle-related cardiometabolic diseases like diabetes, heart disease, obesity and certain cancers. In the long run, we believe we can create a new class of therapies at lower cost to existing ones, with equal or greater effectiveness and considerably fewer side-effects. It is an ambitious aim but to be fair, we are standing on the shoulders of giants -- not just those who pioneered the use of lifestyle as medicine and behavioral science but also those who developed the social networks and high-powered computing that enables a new platform for the delivery of lifestyle medicine.

Last year, we built a rudimentary version of our first therapeutic and studied it in a real-world implementation. Our goal was to assess user engagement and demonstrate efficacy in weight loss. Target weight loss at 16 weeks was 5% of initial body weight, a clinically meaningful threshold known to impart reductions in cardiometabolic risk factors.

We recruited participants online and screened for women aged 45-54, with a BMI of 30-35, who also indicated a willingness to prepare meals at home and eat mostly whole, plant-based foods.

We offered each participant a 16 week intervention at no cost, comprised of an early version of our digital therapeutic. The principle aim of the intervention was to achieve, in those that engaged, clinically meaningful weight loss in a manner consistent with long-lived lifestyle changes and long-term improvements in health and vitality. Our hypothesis is that facilitating lasting lifestyle change requires the development of a core skill set in a manner that is meaningful to that individual and fosters a growth-oriented mindset. Internally, we describe this skill set as culinary health literacy (“CHL”) and use that term to be inclusive of specific components of food literacy, health literacy and behavioral skills like planning and self-monitoring. Our program is intended to enable a basic proficiency in CHL.

The nutritional features and exercise recommendations were all derived from evidenced-based interventions and findings. Additionally, we incorporated key principles established by our advisory board. For instance, Dr. David Eisenberg’s work has demonstrated the importance of meals prepared at home and the mandate for teaching kitchens. Dr. David Katz has studied and written extensively on the need for skillpower and the power of lifestyle as medicine. Margaret Moore pioneered the field of health coaching, and Master Chef Mark Erickson and the Culinary Institute of America are international leaders in culinary education. Here’s what we found.

Weight loss among completers was 5.1% and in those in the top tertile of engagement was 7.1%. 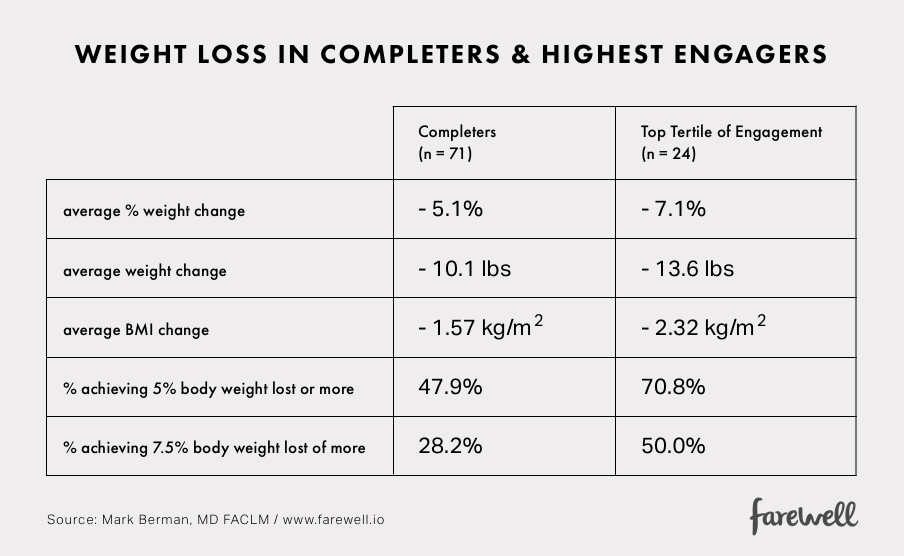 These results are consistent with those found in published lifestyle medicine interventions using in-person programs and were achieved without prescribing caloric deficits or calorie counting.

Average frequency of physical activity was logged as 4 times per week for completers. Physical activity was logged by self-report as a daily target. By default, the program set a goal of 20 minutes per day of moderately-intense activity as a goal for the first four weeks, increasing to a minimum of 30 minutes per day in week five. Participants logged whether they met or did not meet this minimum.

What else did we learn?

Engagement is predictive of success.

We hypothesized that participants who engaged more with our program would do better. Many explanations could account for this: it could be because the program facilitates behavior change (but only if a person engages); it could also be because those who are doing well, or feel more capable, stay engaged and engage more often. Either way, we discovered that we can clearly see this engagement response in our data. Here are some examples in our completers. Since our definition of completer mandates a continued minimal engagement at 16 weeks, this decreases the likelihood that the weight change was due to a greater ability to observe those who are more engaged. 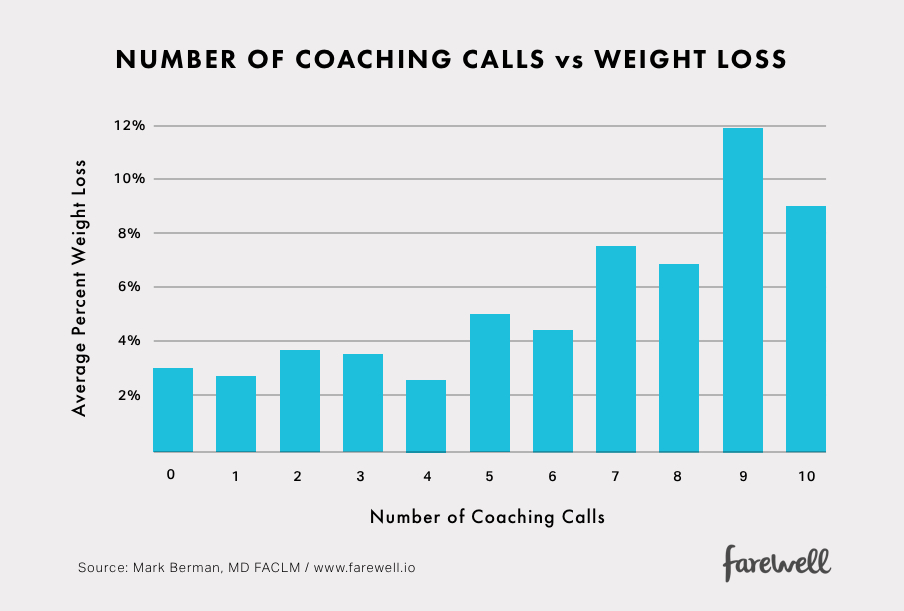 We see a strong relationship between participation in health coaching and weight loss. 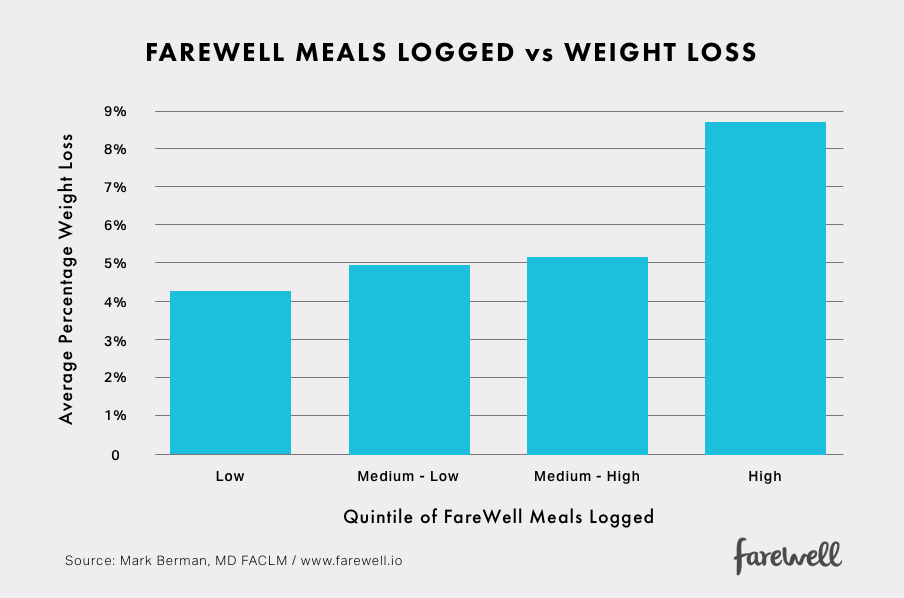 While both activity and dietary pattern impact weight, the consensus is that dietary pattern is a more powerful variable in today’s environment. Thus, we anticipate that measures reflecting changes in dietary pattern correlate with weight change. The data show that those who reported assembling the most Better meals had the greatest change in weight.

There will always be a distribution of outcomes in any given population receiving the same intervention. While it’s important to understand the average impact, it’s even more important to be able to predict who will be the most and least positively impacted. In our first foray into the world of machine learning, we examined the predictive power of each core feature in our product. We learned that all features showed some meaningful predictive power, but some more than others, and that our machine learning model could predict our main outcome with sufficient accuracy.

Informed by our advisors at the Harvard School of Public Health and the Culinary Institute of America, we created a technique-driven framework for categorizing meals by type and then loosely ordered their appearance in a given week’s meal plan based on an estimated level of difficulty. In turn, when members logged meals they made, we could quantify which categories were made and how often. We chose an estimate of proficiency as making a given meal-type at least 7 times. Below we summarize change in weight based on quintile of categories made 7 or more times. 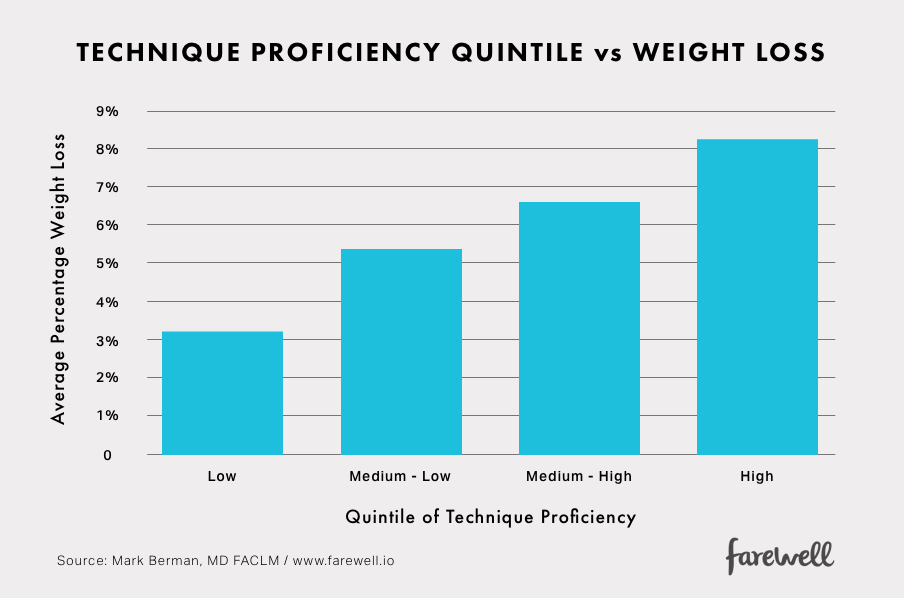 This finding supports our hypothesis that progressive repetition of core techniques (a method for gaining proficiency) is associated with a dietary pattern shift that affords progressive weight loss.

This relationship persists if we normalize this data by number of meals made. We can also use machine learning to see if a better threshold of proficiency can be made. As it turned out, 7 was was within the range discovered by our model.Laboratory findings generate hypotheses

Weight loss alone is well established as a mediator of metabolic improvements in those who are overweight or obese. Similarly, healthy lifestyle changes can also mediate improvements that are independent of weight change. Therefore, to understand the full impact of a digital lifestyle therapeutic it’s important to study other markers of cardiometabolic health. In parallel with this pilot, we began collecting laboratory data to inform our future studies.

Pilot participants in our last three enrolled cohorts were invited to participate in a laboratory study of before and after program labs. We screened participants who expressed interest to decrease likelihood of confounding factors, e.g. recent medication adjustments, and offered follow-up labs to those who had baseline metabolic abnormalities and completed the 16 week program.

At present, we have a small sample of before-after labs and our findings are consistent with those found in the plant-based nutrition and lifestyle medicine literature. For example, among 7 participants with impaired glycemic responses at baseline, all 7 showed improvement in a1c (5 participants, with 3 returning to normal) or insulin sensitivity (7 participants) at 16 weeks. Glycemic measures assessed include fasting blood glucose and insulin, hemoglobin A1c, and calculated HOMA2 measures of beta-cell function and insulin sensitivity.

Ongoing data collection and future studies will enable us to determine the consistency of these findings.

The process of health coaching regularly provokes surprising insights in members that they consider to be transformative.

I’ve written elsewhere about the distinction between dieting and lifestyle change. Dieting involves no real transformation. It is a temporary obsessive state characterized by following a strict (and often arbitrary) set of dietary and exercise rules, routinely followed by a return to default patterns of behavior that inspired the dieting in the first place. Lifestyle change is something different. One characteristic of lifestyle change is the generation of insights. A well-structured coaching process repeatedly produces these insights. However, the nature of the insights is often experienced as surprising to both coach and member. This is rather delightful to observe. And I’d venture to say it’s one of the most inspiring parts of working with people in this way.

Our approach to facilitating lifestyle change is different than what members have previously experienced.

For the vast majority of our members, this is not their first attempt to lose weight and improve their health. Most have tried countless fad diets and commercial weight loss programs. While we did our best to communicate what our program was all about, we often received feedback that members expected a small variation of programs they’ve done many times over -- count your calories, shrink your portions, do vigorous exercise 3x a week, etc. They were surprised that there was a different way to approach the same problem.

We’ve completed our first pilot trial and in doing so established a methodology for capturing and analysing data that will enable us evolve our digital therapeutics. While we are encouraged by our early results and inspired by the journey we’ve shared with our members to date, we also know there is much work ahead. One of the biggest mistakes a healthcare start-up can make is to underestimate the power of the disease-causing environment it sets out to address. It is not a simple matter to transform lives in a way that makes them resilient to this so-called toxic environment. But doing so mandates a belief that we can change the way people experience life for the better and can use data to continuously evaluate how well we are achieving our collective objectives.

The Future of Clinical Trials is Virtual

Accelerating Discovery Through a Better Platform